What is a Continuing Resolution? A continuing resolution (CR) is a temporary spending measure that funds the federal government, typically at the previous fiscal year’s rate, absent completion of 12 appropriations bills by the beginning of the fiscal year. Since enactment of the Congressional Budget and Impoundment Control Act of 1974, which established the current federal budget process, Congress has passed 186 CRs. [1]  CRs are not a preferable way to govern – not only are they indicative of Congress’ failure to follow regular order, but they also deny lawmakers the opportunity to thoroughly debate government spending and update funding priorities. Further, CRs create massive inefficiencies for government agencies, given they cannot adequately plan their activities due to the inherent uncertainties associated with CRs. 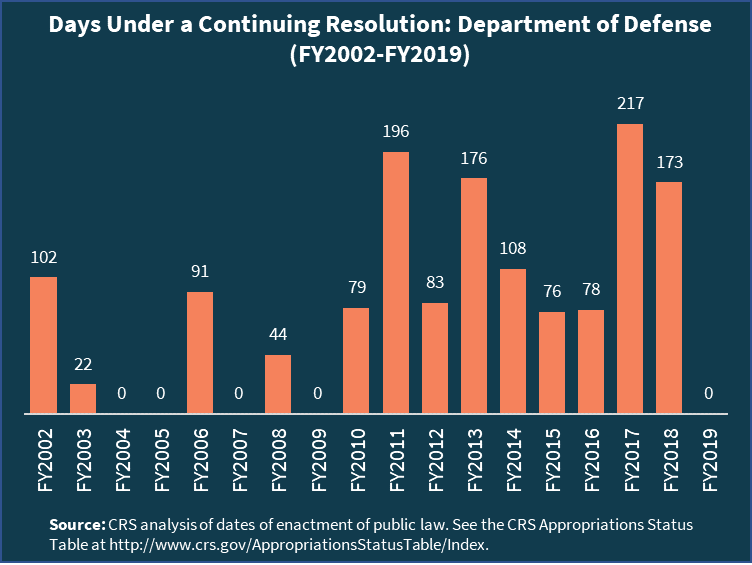 How do CRs Impact Defense? Since fiscal year (FY) 2002, the Department of Defense (DOD) has operated under a CR 13 times. [2]  CRs result in management challenges for DOD by limiting its ability to start new programs or resume projects initiated in previous fiscal years. This results in major program delays and billions of dollars in wasteful spending. Last week, top House Republicans on the Budget, Armed Services, and Appropriations Committees advocated in support of a full-year spending bill for defense, and outlined the harmful consequences a CR would have on the U.S. military:

Just last week, the Pentagon reiterated the need for a year-long defense spending bill and the negative consequences of a CR on the military: “The DOD needs sufficient, predictable, and timely funding. Under a CR, the Department cannot continue the modernization progress made under the previous budget deal…The six-week CR has been problematic; another long-term CR will be more so.” [7]

The fact that Congress is currently operating under a CR, which expires November 21, 2019, is further evidence that the federal budget process is broken. A dysfunctional congressional budget process is detrimental to our national security. Then-Secretary of Defense James Mattis confirmed these harmful effects when he testified before the House Armed Services Committee last year: “I cannot overstate the impact to our troops’ morale from all this uncertainty.” [8]  According to former Secretary of Defense Robert Gates, CRs were “dramatically disruptive of sensible and efficient management of the department. This was an outrageous dereliction of duty.” [9]

Next Steps. It is imperative that Congress promptly complete action on a full-year appropriations bill for the defense budget in order to provide certainty to our military so it can efficiently implement the National Defense Strategy.