The Federal Debt is on an Unsustainable Trajectory. The publicly-held debt has averaged 42 percent of gross domestic product (GDP) over the last 50 years; it is at 79 percent of GDP ($17 trillion) today, and it is projected to grow to 144 percent of GDP ($96 trillion) by 2049—which would be by far the highest level in American history. After that, it would continue to grow. In his testimony last week before the House Budget Committee, the Chairman of the Federal Reserve, Jerome Powell, confirmed the nation’s fiscal challenge: “Our debt is growing faster than our economy by a margin…by definition that is unsustainable.” 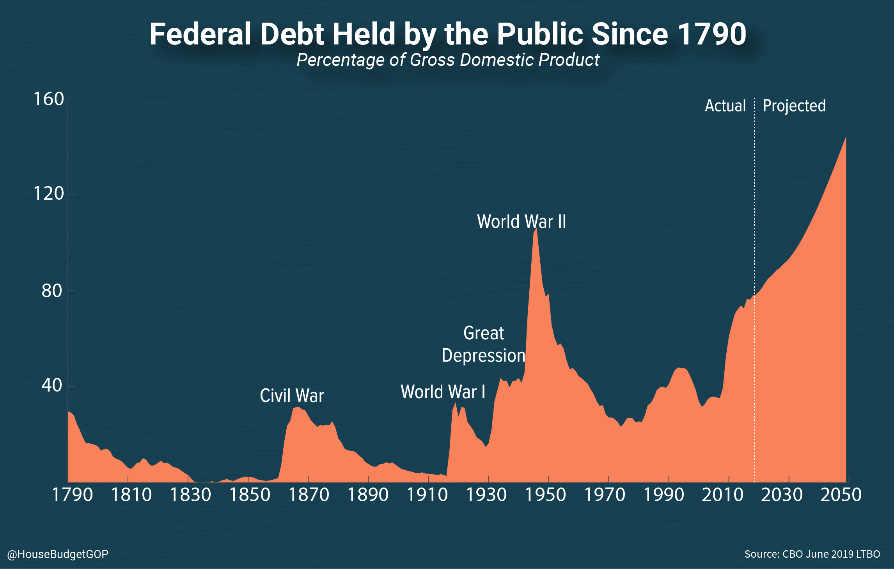 What are the Impacts of Growing Federal Debt? According to the Congressional Budget Office (CBO), growing federal debt has a negative impact on business investment, productivity, and economic growth. Further, interest payments on the debt will increasingly crowd out other federal spending as it continues to consume more of the total federal budget. In fiscal year (FY) 2019, spending on interest was $372 billion and it consumed 8 percent of total federal spending. In FY 2029, spending on interest is projected to increase to $807 billion and consume 12 percent of total federal spending. It is important to note that the rapid growth of spending for interest on the debt occurs even at relatively low interest rates. Should interest rates increase by only one percentage point compared to CBO projections, the cost would amount to an additional $1.8 trillion over ten years. At last week’s hearing, Federal Reserve Chairman Powell described the real impacts of increasing interest rates on Americans: “Over time as the debt builds up…our children will be spending more and more of their tax dollars to pay for interest on the borrowing that we have done  as opposed to the things that they need such as education, health care, and security.”

Finally, a growing federal debt will eventually result in a fiscal crisis. According to CBO, the current debt path increases “the risk of a fiscal crisis—that is, a situation in which the interest rate on federal debt rises abruptly because investors have lost confidence in the U.S. government’s fiscal position.”

On Wednesday, November 20th, the House Budget Committee will hold a hearing titled, “Reexamining the Economic Costs of Debt.” This hearing is an opportunity for members to emphasize the risks associated with our nation’s debt and provide solutions to put the federal government on a fiscally sustainable path.